A driver starts from rest at

and travels with a uniform acceleration of

seconds. He continues with uniform velocity for

seconds, and then decelerates uniformly to rest at

Another driver can accelerate at

and can decelerate at

, the least time in which this driver can cover the distance

from rest to rest

(i) subject to a speed limit of

(ii) subject to a speed limit of

A plane is inclined at an angle

to the horizontal. A particle is projected up the plane with initial velocity

to the plane. The plane of projection is vertical and contains the line of greatest slope.

(ii) Show that the time taken by the particle to reach its maximum perpendicular height above the plane is half the time of flight up the plane.

(iii) When the particle is at its maximum perpendicular height above the plane, the distance travelled parallel to the plane is

of the range up the plane. Show that in that case

are at right angles. Write down the condition satisfied by the scalars

, respectively, collide as shown in the diagram, where

. The sphere of mass

is deflected through an angle of

by the collision. If the coefficient of restitution is

(iii) Find the direction of motion of the other sphere after the collision. 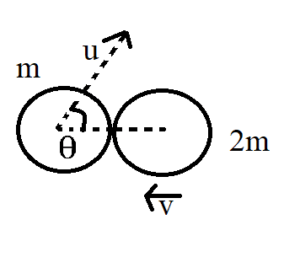 A body of mass

lies on a smooth horizontal table. It is connected by means of a light string passing over a smooth light pulley at the edge of the table, to a second smooth pulley of mass

hanging freely. Over this second pulley passes another light string carrying masses of

(i) Show in separate diagrams the forces acting on each of the masses.

(ii) Write down the equations of motion involving the tensions

in the strings, the common acceleration

masses and the common acceleration

masses relative to the 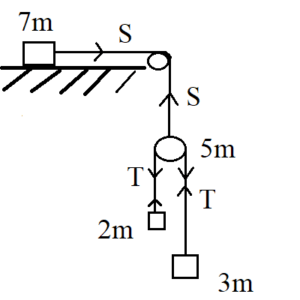 of equal length and of masses

kg, respectively, are freely hinged at

are in a vertical plane and the ends

are on a rough horizontal plane. The coefficient of friction between each rod and the plane is the same.

(i) Find the normal reactions at

is increased until one of the rods begins to slip. Show that slipping will first occur at

are threaded on a fixed smooth horizontal wire. They are connected by means of two light inextensible strings

metres, to a particle of mass

are in the same vertical plane. The system is released from rest with the angles

, show from geometry that

, and using the conservation of energy find

(iii) Show that the velocity of

is the radius of the disc and

If the disc falls a distance

while it turns through an angle

is the angular velocity of the disc. (

Using the principle of angular momentum, find the tension in the string and the vertical acceleration of the disc. 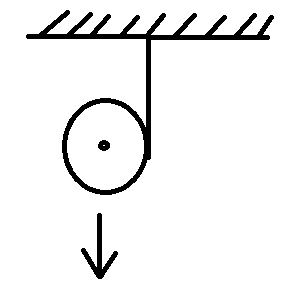 (iii) A particle of mass

is acted on by a force

directed away from a fixed point

is the distance of the particle from

. The particle starts from rest at a distance

. Show that the velocity of the particle tends to a limit

are moving along two perpendicular lines towards a point

with constant velocities of

. Find the distance between them when they are nearest to each other.

(b) State the Principle of Archimedes.

floats with its axis vertical in a liquid of relative density

(i) Find the length of the axis of the cylinder immersed.

(ii) The cylinder is depressed vertically a further small distance

and release. Show that it will preform simple harmonic motion, and find the period.

. Find the position of the centre of gravity of the remainder.

tonnes is maintaining a steady speed of

m/s up an incline of

against frictional forces amounting to

kN. Calculate the power at which the engine is working. (

(c) A corner on a level track has a radius of

m. Calculate the maximum speed at which a cyclist could take the corner if the coefficient of friction were