i) How may a velocity-time graph be used to find the distance travelled in a given time?

seconds. Starting from rest, he accelerates uniformly to a speed of

m/s. and then continues at that speed. Calculate the acceleration.

iii) A body starting from rest travels in a straight line, first with uniform acceleration

and then with uniform deceleration

. It comes to rest when it has covered a total distance

. If the overall time for journey is

is travelling South-West at

knots in a direction

i) Draw a diagram to show the velocity of

iii) By how much should

increase its speed, without changing direction, so that

to be travelling due North?

a) Explain the terms: coefficient of friction, angle of friction. What is the relationship between them?

b) A uniform ladder of weight

to the horizontal (seed diagram). The ladder makes an angle

i) Show that the reaction at the wall is

is the angle of friction. 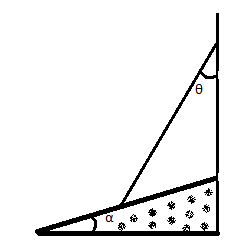 . It carries a mass

at one end and a mass

at the other. The see-saw is released from rest with the mass

, the velocity with which the see-saw strikes the ground.

b) State the Principle of Archimedes.

c) A uniform road of length

. The relative density of the liquid is

. As a result, the rod is inclined but not fully submerged. Derive an expression for the angle the rod makes with the horizontal.

A plane is inclined at an angle

to the horizontal. A particle is projected up the plane with a velocity

to the plane. The plane of projection is vertical and contains the line of greatest slope.

i) Show that the time of flight is

iii) Prove that the particle will strike the plane horizontally if

a) A particle, moving at constant speed, is describing a horizontal circle on the inside surface of a smooth sphere of radius

. The centre of the circle is a distance

below the centre of the sphere. Prove that the speed of the particle is

attached to it which is rotating with uniform angular velocity

. The natural length of the string is

and its elastic constant is

produces unit extension. The extended length of the string is

and it makes an angle

with the vertical. Prove that

a) Two smooth spheres of masses

collide directly when moving in opposite directions with speeds

, respectively. The sphere of mass

is brought to rest by the impact. Prove that

is the coefficient of restitution.

b) A smooth sphere

collides obliquely with another smooth sphere of equal mass which is at rest. Before impact the direction of motion of

with the line of centres at impact (see diagram). After impact it makes an angle

with that line. If the coefficient of restitution is 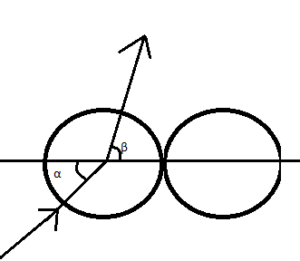 a) Define simple harmonic motion. Using the usual notation, show that the equation

b) A body is moving with simple harmonic motion, of amplitude

m from the mid-point of its path its speed is

m/s. Find its speed when it is

m from the mid-point.

c) A block rests on a rough platform which moves to and fro horizontally with simple harmonic motion. The amplitude is

complete oscillations occur per minute. If the block remains at rest relative to the platform throughout the motion, find the least possible value the coefficient of friction can have.

a) State the theorem of parallel axes.

about a perpendicular axis through one of its end is

c) A uniform rod of length

is attached to the rim of a uniform disc of diameter

. The rod is colinear with a diameter of the disc (see diagram). The disc and the rod are both of mass

, show that the periodic time is 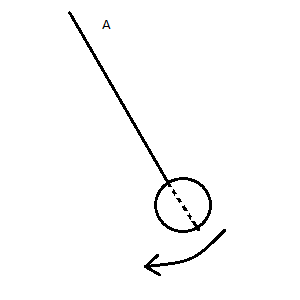 is the velocity. The initial velocity is

m/s. In how many seconds will the velocity of the body be

m/s and how far will it travel in that time?