Special Thanks: A copy of this Leaving Cert Applied Maths Higher Level 1971 exam was kindly provided by Noel Cunningham.

a) Explain how a graph of velocity plotted against time can be used to calculate acceleration and distance travelled, with particular reference to motion with constant acceleration.

metres when its velocity is

. If the stone takes

seconds to reach the ground, show that the direction of

is not horizontal and compute the greatest height reached by the stone after release. (Give your answer correct to the nearest tenth of a metre.)

A particle is projected from a point

on a plane inclined at

to the horizontal with a velocity

is a unit vector through

is a unit vector perpendicular to the plane.

i) Show that after time

of the particle relative to

ii) Prove that the range on the inclined plane is

iii) and find the velocity of the particle when it strikes the plane.

of equal radii but of masses

kg respectively collide on a smooth horizontal table. Before collision the velocity of

m/s and the velocity of

are unit perpendicular vectors in the plane of the table and

lies along the line of centres at impact. If the collision is perfectly elastic find the velocity of

and the velocity of

kg, then over a smooth fixed pulley

kg hangs freely from its other side. All parts of the string which are not touching the pulleys are vertical. 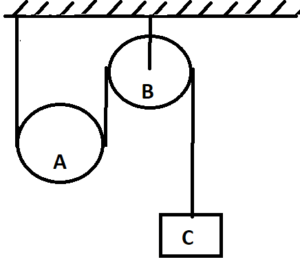 and that the acceleration of the pulley is half this.

ii) Find also the tension in the string.

is a constant, is a solution of this equation.

m/s when at a distance of

m respectively from the centre of oscillation.

i) Find the amplitude and periodic time of the motion.

are constant unit perpendicular vectors, is the position vector at time

of a particle moving in a circle.

ii) Show that the velocity

and is at right angles to

iii) Prove that the acceleration is of magnitude

and acts towards the centre of the circle.

kg is describing a circle on a smooth horizontal table. It is connected by a light inelastic string of length

m to a point which is

m vertically above the centre of the circle. If the reaction of the table on the mass is

i) the constant angular velocity of the particle,

(ii) the tension of the string.

, of equal lengths but of weights

, respectively, are freely hinged together at

. They stand in equilibrium in a vertical plane with the ends

on a rough horizontal plane with the angle

ii) Show in a separate diagram the forces acting on each rod, using vertical and horizontal components for the reaction at

. Find all these forces and prove that if one rod is on the point of slipping, the coefficient of friction is

about an axis  through its centre

, perpendicular to the plane of the lamina, is

on its circumference. It is released from rest with

horizontal. Find the angular velocity of the lamina where

with the download vertical, show that the speed of

at its lower point is

a ) State Archimedes Principle for a body immersed in a liquid.

b) A uniform rod

supported by a vertical force

i) Show that in a diagram the three force acting on the rod, and prove that the specific gravity of the rod is

, the weight of the rod.

is projected with speed

along a smooth horizontal table. The air resistance to motion when the speed of the particle is

i) By solving the equation of motion for the particle, show that

iii) Find the time taken for the particle to travel half this distance.