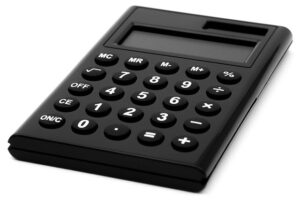 When I was a JC student (Irish middle school) we were not allowed to use a calculator in class or the exam but then the calculator was introduced for LC students (senior high school). One thing that perplexed us students at the time was this, why were we allowed to use the calculator “next year” (when the LC years started) but not this JC year? What logic would allow for both?

The reasoning our teacher suggested (which was not necessarily his opinion) what this, by allowing students the use of the calculator one is freeing up both mental resources and time to allow students to tackle more difficult questions. This model assumes the students’ mind is like a computer with finite resources to deploy.

I have been teaching international students for over 12 years now who all have different calculator experiences. What I have observed is that the opposite is the case. That is, by not allowing students to have a calculator they become stronger at Mathematics. This should not be a surprise. Students must develop a deeper understanding of Mathematics so that they can tackle the problems they are faced when they don’t have a calculator they can use.

Indeed, it seems that stressing students mentally improves their performance and does not “use up” their mental resources but instead causes them to perform better. In Daniel Kahneman’s book “Thinking, Fast and Slow” he points to research that shows students perform better when the exam is printed poorly thus making is harder to read. It seems any mild cogitative strain can be good (such as spending more time reading the question or remembering the quick way to square a number like 25). Indeed, I have seen research that shows students perform better in exams when a little hungry, again another stressor. And for those who have read Anti-Fragile by Nassim Nicholas Taleb this should not be a surprise to you, that is, all this talk of the benefits of stressors be it mental of physical.

Soon after introducing the calculator to the LC it was introduced to the JC and I found a paper which compared how students performed  both before and after the calculator was introduced. The research looked at 4 tests given in 2001 and 2004. What interested me the most was how students did on the “Calculator Inappropriate Test, No Calculator Available – All Students”. The students in 2004 would be use to having a calculator and the 2001 students would be use to not having a calculator. What did the report find? Emphasis added are mine:

“While there was a decline in performance on the Calculator Inappropriate test over the three years (60% vs. 56.8% correct), it was not statistically significant. This can be interpreted as suggesting that students in 2004 had not lost out on basic mathematical skills while following the revised Junior Certificate [JC] mathematics syllabus with access to calculators, compared to students in 2001 who did not have access to calculators.”

It would seem in either 2001 or 2004 students which were assigned a calculator for the exam did better than those who could not use it. Hardly a surprise and I would expect this to hold for any two group of students (or rather any one group split randomly into two). If I allow half my students a calculator and half not then I know which half should do better in that exam. However, note the report:

“There was a slight fall (8.7 scale points) over the three years in the performance of the noncalculator group, perhaps implying that students in this group had become less accustomed to working without access to calculators on tasks of the type on the Calculator Optional test.”

Overall, the research requires further studies since this research was done a little too early and I suspect a lag factor here which is hiding a genuine decline in mathematical ability due to the widespread use of calculators. I’ll finish with:

“Almost three-quarters of students in 2004 reported that they had never used a calculator in their mathematics classes in primary school, though the vast majority of these would have completed primary school before the implementation of the revised 1999 Primary School Curriculum which recommends use of calculators from 4th Class onwards.”

It would be interesting to see how a 2021 group would compare with the 2001 group. Any takers for this research?