Being given a small nearly frictionless truck of known weight, a weight of

lb. each, and a horizontal plane fitted with pulley, describe in detail how you would show experimentally that the acceleration of a system of constant mass is proportional to the force producing the acceleration.

The amplitude of the vibration of a simple pendulum, of length

ft. Find the maximum velocity of the bob.

oz. is fired horizontally into a block weighing

lb. suspended as a ballistic pendulum of length

feet and becomes embedded in it. If the block is displaced through a horizontal distance of

A man standing on a train which is moving at

miles per hour. If the bullet, which is supposed to move in a horizontal straight line, has a velocity of

ft. per second and if the line connecting the man and object makes an angle of

with the direction in which the train is moving, find at what angle to the train he must aim in order to hit the the object.

lb. is suspended by a light, inextensible wire so that its c.g. is

ft. below the point of support. It is projected with an initial horizontal velocity

with the upward-drawn vertical. Find the velocity of projection and the greatest vertical height attained above the point of projection.

A cycle track has a radius of

ft. and is to be banked for a speed of

miles per hour. Determine the angle which the track surface must make with the horizontal (i) when the friction between the wheels and the surface is entirely neglected, (ii) when the co-efficient of friction is taken as having a value of

Taking the frictional resistance as

lb. per ton, find the Horse Power required to produce a speed of

miles per hour in a train weighing

minutes (i) on the level, (ii) down an incline of

A pin-jointed framework, of the form shown in the diagram, is loaded as indicated. It is supported by a fixed pin at

and is kept in position with

vertical by a horizontal force at

. Determine the stresses in the bars, indicating in each case whether the bar is thrust or in tension. 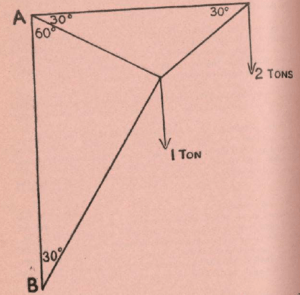 Show that the total work done in raising a body against gravity by any part is equal to the product of the weight and the vertical height through which the c.g. is raised. Does this principle hold if the body is not rigid? A chain weighing

lb. per foot length and

ft. long hangs over a pulley with one end

ft. above the other. Find the work done in bringing the lower end to within

ft. of the level of the other end.

lb., has one end resting on a concrete floor and the other against a vertical wall. The c.g. is

ft. from the lower end, and a man weighing

lb. stands on a rung

ft. from the same end. If the co-efficient of friction at each end is

, find the inclination of the ladder if it is just about to slip.

lb. describes a horizontal circle, the ball being attached to two cords, the other ends of which are attached to two points in the same vertical line. Each of these points is

feet from the centre of the ball and the cords are at right angles. If the ball makes

revolutions per second, find the tension of each cord in lbs.