denotes the time in seconds. The distance is

and the velocity is zero when

. Find the values of

and verify that the acceleration is zero when

. Draw rough diagrams showing how (a) the acceleration, (b) the velocity varies between

lb. is moving in a straight line with Simple Harmonic Motion. If the greatest velocity is

ft. per second. and the amplitude of the oscillation is

ft., find the period of oscillation and the force of attraction towards the centre when the body is at its greatest distance from the centre.

A body is projected with velocity

to the horizon, from the foot of a plane inclined at angle

to the horizon. Determine its range up the plane. Show that for a given value of

, the range is a maximum when the direction of projection bisects the angle between the inclined plane and the vertical. Determine the least velocity with a ball can be thrown to reach the top of a cliff

ft. away from the thrower, neglecting air resistance.

lb. weight is placed on a smooth table and is attached to a

A car weighing one tone is rounding a curve of

yards radius on a level road. What is the greatest speed at which this is possible, without causing the car to overturn, if the wheel gauge is

ft. and the C.G. is mid-way between the wheels transversely and at a height of

ft. from the ground? What is the frictional force between the road and tyres at this speed?

ft. and delivers it through a pipe whose cross-sectional area is

A pin-jointed framework of the form shown in diagram, is pin-jointed to a vertical wall at

and carries a vertical load of

. Find the forces exerted by the frame on the wall, and determine the stresses in the bards, indicating whether the bar is in thrust or in tension in each case. 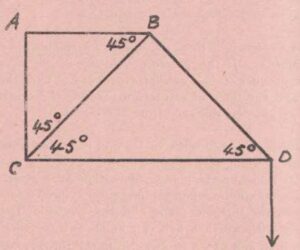 ft. to drive a pile weighing

cwt. into the ground. Find the average resistance to the motion of the pile if it is driven

inches by the blow, assuming that the weight moves on with the pile.

lbs., is kept in equilibrium on a rough plane inclined at

to the horizontal by a cord inclined at

to the plane. Find the frictional force between the body and the plane and indicate its direction when the tension in the cord is 6lbs. Find the work done in dragging the body slowly through a distance of one foot up the plane, assuming the coefficient of friction to be

and the cord to remain constantly at an angle of

, of a governor, weigh

lbs. each; the arms

are each inclined at

to the vertical and are

ft. long. Find the number of revolutions per minute they are making and the tension in each rod; the weights of the rods,

[sic], may be neglected.