(a) Show that, if a particle is moving in a straight line with constant acceleration

, the distance travelled in time

apart. A particle starts from

in a straight line with initial velocity

A second particle starts at the same time from

at which the particle collide, and the condition satisfied by

if this occurs before the second particle returns to

A particle is projected upwards with a speed of

m/s from a point

on a plane inclined at

(i) Write down the velocity of the particle and

(ii) its displacement from

The diagram shows a light inelastic string, passing over a fixed pulley

to a light movable pulley

. Over this pulley passes a second light inelastic string to the ends of which are attached particles

(i) Show in separate diagrams the forces acting on

(ii) Write down the three equations of motion involving the tensions

in the strings, the acceleration of

and the common acceleration of 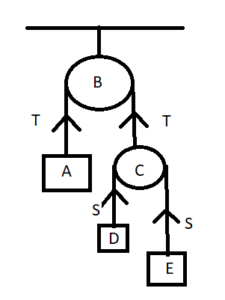 A light smooth ring of mass

is threaded on a smooth fixed vertical wire and is connected by a light inelastic string, passing over a fixed smooth peg at a distance

from the write, to a particle of mass

hanging freely. The system is released from rest when the string is horizontal. Explain why the conservation of energy can be applied to the system. If the ring descends a distance of

while the particle rises through a distance

are the speeds of the ring and particle respectively.

(a) State the laws governing the oblique collisions of elastic spheres.

(b) A sphere of mass

collides obliquely with a second smooth sphere at rest. The direction of motion of the moving sphere is inclined at

to the line of centres at impact, and the coefficient of restitution is

. After impact the directions of motion of the spheres are at right angles.

Find the mass of the second sphere in terms of

, and the velocities of the two spheres after impact in terms of

. Hence show that one quarter of the kinetic energy is lost.

respectively are smoothly hinged together at

. They stand in equilibrium in a vertical plane with the end

resting on rough horizontal ground and the end

resting against a smooth vertical wall. The point

is farther from the wall than

are inclined at angles

respectively to the horizontal where

(i) Show in separate diagrams the forces acting on each rod.

(ii) By considering separately the equilibrium of the system

, find the coefficient of friction at

(b) A particle of mass

kg is attached to the ends of two light elastic strings, each of natural length

N/m. The other ends of the two strings are attached to two fixed points

in the same vertical line, where

. The particle when is released from rest from the midpoint of

, show that it is moving with simple harmonic motion.

, and find its speed there.

A pendulum of a clock consists of a thin uniform rod

to which is rigidly attached a uniform circular disc of mass

with the centre of the disc being at the point

(i) Using the parallel axes theorem for the disc, show that the moment of inertia of the pendulum is free to oscillate in a vertical plane about such a fixed horizontal axis at

(ii) It is released from rest with

horizontal. Find the speed of

An atomic nucleus of mass

is repelled from a fixed point

is the distance of the nucleus from

is a constant. It is projected directly towards

. Find the speed of the nucleus when it reaches the midpoint of

and find how near it gets to

in the neighbourhood of

, i.e. the Maclaurin series for

(b) State Archimedes principle for a body wholly or partly immersed in a liquid.

(c) A uniform thin rod is of length

. The rod rests in equilibrium in an inclined position partly immersed in water with its lower end freely pivoted to a fixed point at depth

below the surface of the water. Show in a diagram the forces acting on the rod and calculate the inclination of the rod to the vertical.