Special Thanks: A copy of this Leaving Cert Applied Maths Higher Level 1974 exam was kindly provided by Noel Cunningham.

A sprinter runs a race with constant acceleration

throughout. During the race he passes four posts

in a straight line such that

m. If the sprinter takes

seconds to run from

seconds to run from

, find how long, to the nearest tenth of a second, it takes him to run from

. On one road a car is travelling due north at

m/s. As the car passes through

and is travelling east towards

on the other road at

m/s. Find the velocity of the bus relative to the car and show the relative path on a diagram containing the initial positions of the car and bus. Calculate the least distance between the car and the bus in the subsequent motion and find when this occurs.

is the cross-section of a smooth heavy wedge of mass

is a right angle. The wedge rests with its face

on a smooth horizontal table. A light inelastic string passes over a small smooth pulley fixed at the vertex

of the section of the wedge and supports particles of masses

, lying on the inclined plane

, hanging freely against the vertical face

. When the system is released from rest, the wedge moves with an acceleration

moves with an acceleration

relative to the wedge. 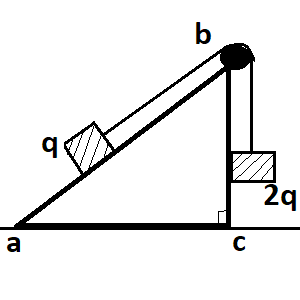 Show on separate diagrams the forces acting on each particle and on the wedge, in particular the action of the string on the wedge. Write down the five equations of motion of the particles and the wedge involving

are constants, then the motion is simple harmonic.

b) A light flexible elastic string

tied to a fixed point and has a particle of mass

kg attached to the end

. The particle is held

and is then released from rest to fall under gravity.

m, show that it moves with simple harmonic motion and that its acceleration is zero when

ii) Find the time taken to fall a distance 0.3m.

is a constant, is the position vector of a particle moving in a circle of radius

. Prove that the velocity

 at right angles to

. Find the components of the acceleration

m, to a fixed point

and to a ring of mass

, which is free to slide on a smooth fixed vertical wire

. The particle and strings rotate about

rad/s. Show on separate diagrams the forces acting on the particle and on the ring and calculate the tensions in the two strings.

, are freely joined together at

and hang freely from a fixed pivot at

acting in a horizontal direction is applied at

and an equilibrium position is reached when

makes an angle of

i) In separate diagrams show the forces acting on

iii) Prove that the magnitude of the reaction at

with the vertical, prove that

on a plane, inclined at

to the horizontal, a particle is projected with speed

 to the plane. The motion takes place in a vertical plane through a line of greatest slope up the plane from

i) Express the velocity

of the particle after time

are unit vectors along and perpendicular to the plane, respectively.

ii) Prove that the particle strikes the plane at

 and that the range on the inclined plane is

a) State the laws governing the oblique collisions between smooth elastic spheres.

, respectively, collide obliquely and the coefficient of restitution for the collision is

and the velocity of

points along the line of centres at impact. Find the velocities of the spheres after the impact and show that the loss in kinetic energy is

about a diameter is

so that the centres of the spheres are at a distance

apart. If the dumb-bell is freely pivoted at a point of the bar distance

from its centre so that it can perform small oscillations in a vertical plane,

ii) find the period of oscillation.

Newtons when the speed of the particle is

iii) Find an expression for the distance travelled in time