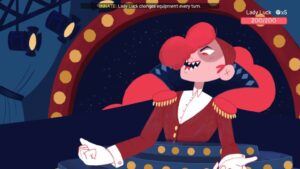 It took 67 hours but I finally finished Dicey Dungeons. It is a very Mathematically satisfying game since the core concept of the game is rolling dice to place on cards. Now, I’ve actually simplified it. The game starts off like this but builds in complexity however it still hinges on dice rolls. Anyway, it’s a good probability based number crunching game.

It is a rather interesting coincidence that I came across something else dice related recently. That is, Non-transitive Dice. These dice are very interesting, before I explain, here is a picture of them I got from: http://www.singingbanana.com/dice/article.htm

Now, if you play with these you’ll discover that rolling a red against a blue with have blue win more often. Another example, rolling a blue against an olive will see the olive win more often. In fact the dice can be ordered as follows… Magenta beats yellow which beats olive which beats blue which beats red. But here is the mad part… red beats magenta! So it forms a rock-paper-scissor style circle.

It gets even stranger, if you were to play with pairs of dice, that is, two red against two blue you’ll discover the red will win. So, believe it or not, the order is reversed when played with pairs instead of single dice. Check out the article above for more of the Mathematics of it and even a link to buy some of these cool dice! 🙂