km and then return immediately to its starting point at the origin. The velocity of the water is

km/hour and the boat has a speed of

is the velocity of the boat on the outward journey,

and the time taken for the outward journey, leaving your answer in surd form.

ii) Find, also, the time taken for the whole journey.

A body of weight

is supported by two vertical inextensible strings at

as in diagram where

cm. The tensions in the strings are

and the string of tension

makes an angle of

. The centre of gravity of the body is at

and hence find the distance of 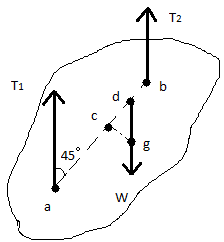 A projectile is fired with initial velocity

is along the horizontal. A plane

passes through the point of projection and makes an angle

i) If the projectile strikes the plane

at right angles to

ii) and deduce that

the range of the projectile alone

a) State and prove the relationship between the coefficient of friction

and the angle of friction

b) The diagram shows a particle of weight

on a rough plane making an angle

with the horizontal. The particle is acted upon by a force

whose lien of action makes an angle

with the line of greatest slope. The particle is just one the point of moving up the plane.

i) Draw a diagram showing the forces acting on the particle

ii) and prove that

If the particle is just on the point of moving up the plane, deduce

iv) the horizontal force that would achieve it

v) the minimum force that would achieve it. 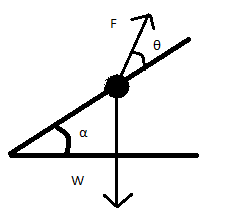 a) Two imperfectly elastic spheres of equal mass moving horizontally along the same straight line impinge and, as a result, one of them is brought to rest. Show that whatever be the value of the coefficient of restitution,

, they must have been moving in opposite directions.

kg moving with a speed

. This plane is inclined to the table at an angle

and the line of intersection of it with the table is at right angles to the direction of motion of the sphere.

i) Write down the components of the velocity of

is the velocity of

perpendicular to the plane after impact where

is the coefficient of restitution between the sphere and the plane.

iii) Find the magnitude of the impulse due to the impact. 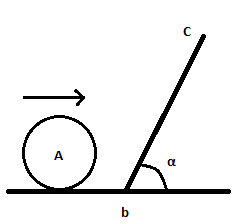 a) If a string whose elastic constant is

is stretched a distance

beyond its natural length, show that the work done is

in the plane by a light string of elastic constant

. Initially the string is just taut and the particle is projected along the plane directly away from

i) Find an expression for the distance

travelled by the particle.

a) Establish the moment of inertia of a uniform rod about an axis through its centre perpendicular to the rod.

b) State the parallel axes theorem.

has a mass of

attached at its mid-point. Find the positions of a point in the rod about which the rod (with attached mass) may oscillate as a compound pendulum, having period equal to that of a simple pendulum of length

from a fixed point at time

Show that the particle is movign with simple harmonic motion.

b) A particle is moving in a straight line with simple harmonic motion. When it is a point

m from the mean-centre, its speed is

m/s and when it is at a point

, its acceleration is of magnitude

is the amplitude of the motion,

and hence find the value of

correct to two places of decimals.

b) A car starts from rest. When it is at a distance

from its starting point, its speed is

and its acceleration is

and find as accurately as the tables allow its speed when

a) A vessel is in the form of a frustum of a right circular cone. It contains liquid to a depth

of the area of the base. Find in simplest surd form the ratio of the thrust on the base due to the liquid to the weight of the liquid.

b) A piece of wood and a piece of metal weigh

N, respectively. When combined together the compound body weighs

N in water. Given that the specific gravity of the metal is

, find the specific gravity of the wood.