i) A body starts from rest at

, travels in a straight line and then comes to rest at

. The time taken is

seconds. For the first

seconds it has uniform acceleration

. It then travels at constant speed and is finally brought to rest by a uniform deceleration

ii) If the journey from rest to at

had been travelled with no interval of constant speed, but subject to

, show that the time for the journey is

a i) If a body is in equilibrium under the action of two and only two forces, what can be deduced about the forces? I

ii) If a body is in equilibrium under the action of three non parallel forces prove that their lines of action must be concurrent and that the forces may be represented in magnitude and direction by the sides of a triangle taken in order.

b) A straight, rigid non-uniform rod

rests in equilibrium inside a smooth hollow sphere of radius

. The distances of its centre of gravity, 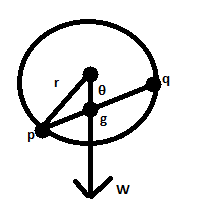 , the angle the rod makes with the vertical, is given by

ii) Prove that the magnitude of the reaction at

a) Establish an expression, in terms of initial speed

and angle of inclination to the horizontal

, for the range of a projectile on a horizontal plane through the point of projection. Deduce that the maximum range for a given

b) A particle is projected at initial speed

from the top of a cliff of height

, the trajectory being out to sea in a plane perpendicular to the cliff. The particle strikes the sea at a distance

from the foot of the cliff. Show that the possible times of light can be obtained from the equation

Hence, or otherwise, prove that the maximum value of

impinges directly on an equal sphere

, moving in the same direction with velocity

. Show that the loss in kinetic energy due to the impact is

is the coefficient of restitution between the spheres.

had been at rest and

impinged obliquely, so that after impact,

in a direction making an angle of

with the line of centres of the spheres, show that the loss in kinetic energy is three times greater than in (i).

a) Prove that the centre of gravity of a uniform triangular lamina is at the point of intersection of its medians.

b) A uniform triangular lamina

The lamina is suspended in a horizontal position by three inextensible, vertical strings, one at each vertex. A particle of weight

newtons is positioned on the lamina

and one cm from

. Calculate the tension on each string in terms of 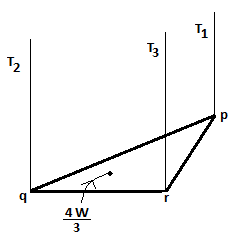 a) Establish the formula

for the periodic time of a simple pendulum of length

. The length of a seconds pendulum

is altered so as to execute

complete oscillations per minute. Calculate the percentage change in length.

. It is partially supported by a light inextensible string attached to a fixed point

metres above the table. Calculate the value of

a) i) A uniform circular disk has mass

. Prove that is moment of inertia,

, about an axis through its centre perpendicular to its plane is

ii) Deduce the moment of inertia about an axis through a point on its rim perpendicular to its plane.

b) A uniform circular disk has mass

. It is free to rotate about a fixed horizontal axis through a point

on its rim perpendicular to its plane. A particle of mass

is attached to the disk at a point

on its rim diametrically opposite

. The disk is held with

horizontal and released from rest.

, the angular velocity when

ii) If the system were to oscillate as a compound pendulum, prove that it would have a periodic time equal to that of a simple pendulum of length 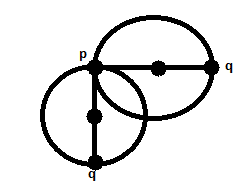 with the vertical. Prove that 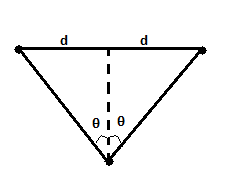 b) A horizontal platform, on which bodies are resting, oscillates vertically with simple harmonic motion of amplitude

m. What is the maximum integral number of complete oscillations per minute it can make, if the bodies are not to leave the platform?

. If the resulting weights, in order, are

b) A uniform rectangular board

, hangs vertically in fresh water with the diagonal

on the surface. The board is held in that position by a vertical string at

i) Show on a diagram all forces acting on the board.

) in the string and buoyancy force (

, the weight of the board.

iii) Calculate the specific gravity of the board.

b) Find the general solution to

A particle moves in a straight lien so that at any instant its acceleration is, in magnitude, half its velocity. If its initial velocity is

m/s, find an expression for the distance it describes in the fifth second.